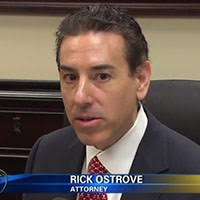 Rick Ostrove is principal trial counsel for Leeds Brown Law, P.C. Rick has won numerous jury verdicts including a $15M verdict in a sexual harassment case, one of the largest jury awards to an individual plaintiff in an employment discrimination case. During the same year, he obtained a $5.25M award in a workplace retaliation claim. On three occasions, Rick has appeared in Verdict Search’s publication Top New York Verdicts.

In 2013, Rick was recognized by the Labor and Employment Law Committee of the Nassau County Bar Association for having “the highest level of character, integrity, professional expertise and leadership in the field of labor and employment law.” For each of the past five years, Rick has been selected to the New York “Super Lawyers” list, as published with the New York Times Magazine. No more than five percent of the lawyers in the state are selected by the research team at Super Lawyers to receive this honor.

United States District Judge Arthur D. Spatt commented that “Mr. Ostrove is one of the premiere trial lawyers in the field [of employment law] and has tried many cases before me. Mr. Ostrove is outstanding.” Similarly, United States District Judge Joanna Seybert, described Rick as having a “marvelous way with juries” and achieving “fantastic results.”

Although his primary practice areas are employment and civil rights law, Rick has extensive experience handling complex litigation, including commercial, estate, and matrimonial litigations. As lead trial counsel in a federal Unfair Competition case, he managed more than a dozen lawyers from four separate law firms; the action involved over fifty deposed witnesses and approximately twenty expert reports. After closing statements, United States District Judge Leonard D. Wexler described the trial performance as “fantastic,” “superb,” and “excellent.” Judge Wexler added in his published post-trial decision, “[t]his case was highly contested and well-tried by all counsel. Indeed, the court is hard pressed to recall a trial in which the claims of the parties was so competently and clearly presented by counsel to a jury.”

Rick was lead trial counsel in Quinn v. Nassau County, the first case where a court held that workplace harassment of a municipal employee based on sexual orientation violates the 14th Amendment to the U.S. Constitution. In a separate case, Manning v. Nassau County, he used this theory to obtain a $1.5M emotional damage verdict.

Rick frequently appears as a speaker on issues involving civil rights. He has appeared on The O’Reilly Factor, Court TV, and other media outlets. One of his trial victories that garnered national attention was featured on ABC’s 20/20. He has lectured about employment law and trial advocacy at continuing legal education classes hosted by the New York City, Nassau County, and the Suffolk County Bar Associations.

Rick is the former Chairperson of the Nassau County Bar Association’s Labor and Employment Law committee. He is admitted to practice in all State and Federal Courts in New York as well as the United States Supreme Court, and he has successfully argued numerous appeals to the Second Circuit and the New York State Appellate Division.